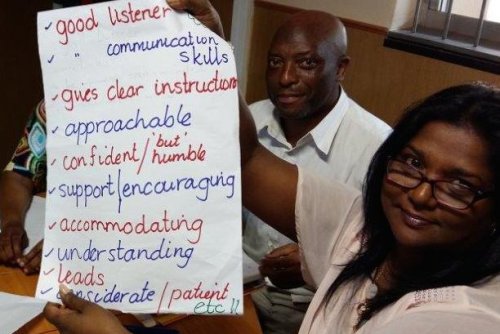 Between 26 and 28 January, 50 provincial and district officials from KwaZulu-Natal (KZN) participated in a three-day workshop on the establishment of Professional Learning Communities (PLCs).

Facilitated by MIET AFRICA, the workshop was also attended by Mr Dhladhla, CES Professional Continuing Professional Teacher Development at the Department of Basic Education (DBE); Mr. Manganye, Head of Teacher Development at KZN Department of Education (KZNDoE) and Mr Vande Walle, Education Advisor at VVOB (funding partner). The workshop was the first in a series of two, with the second workshop planned for early March.

During the workshop, participants used the DBE’s Guidelines on the Establishment of PLCs to explore the defining characteristics of PLCs. A video of a Free State ‘PLC in action’ kick-started discussions around how PLCs work in practice and the challenges they could face.

Based on this initial understanding of PLCs, participants erected a ‘brick wall’ of potential barriers to successful PLCs.  At the end of the workshop, they revisited the wall and, after discussion, removed some barriers based on insights gained during the workshop.

As creating trust is an important pre-condition for successful PLCs, participants explored ways of creating trust in groups.  They discussed the concept of resistance, how it manifests itself in their work, and the strategies they could apply to overcome it.  They talked about their role in supporting PLCs.

Openness and diversity are key characteristics of successful PLCs.  Participants discussed gender and other stereotypes and acknowledged openness toward new members and outside support as an effective way to bring additional expertise and fresh insights to the group.

Good facilitation was also examined, as another important aspect.  Participants agreed that facilitators need to be humble but confident, knowledgeable but open to other ideas, accommodative but firm, observant and preferably, have a keen sense of humour!  It was agreed that PLCs where members take turns to facilitate are likely to be more productive and sustainable than those with a single facilitator.

In preparation for the second, follow-up workshop, participants were tasked with reflecting on the learnings, and sharing and discussing the way forward with their colleagues who were unable to attend the workshop.

This two-workshop PLC training package will be conducted in four other districts in KZN as well as in other provinces.